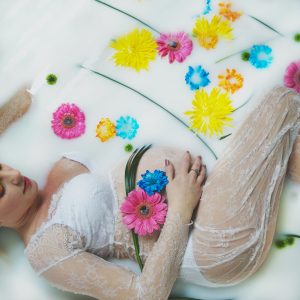 Two gallons of whole milk.
A bunch of flowers from Stop ‘N Shop.
A DIY floral crown made from Michael’s Craft Store goodies.
A lace beach cover-up from Amazon.

Oh, and some stunning makeup on a stunning pregnant lady, of course!

Last Sunday, Danielle showed up at my house with some much needed Dunkin Donuts (I’m really partial to a medium hot caramel latte with whole milk and only one pump of caramel) and no idea what she was about to be in for. My girl Annaliese (Warpaint Makeup Artistry, check her out!) decided to go all tropical with the color scheme, using bright oranges and yellows for Danielle’s makeup. I tried my luck at making a floral head wreath, which came out pretty fabulous, if I do say so myself.

Then, we filled up the tub with two gallons of milk and water, threw in a bunch of flowers -though, at one point, I debated using Froot Loops (or is it Fruit Loops? I don’t even know anymore!) just to be super self-aware of the fact she was chillin’ in what was basically a huge bowl of milk-  and helped this up-for-anything pregnant chick into the tub.

The results? Not too shabby! They came out even better than I thought they would and when I showed them to Danielle, she was beyond excited with the final outcome. Totally worth doing ab exercises for, while being six months pregnant!

Peep for yourself, I also included a before and after image of one of my favorite photos; sometimes, what I see in my mind isn’t exactly what I get when I take the photo. Manipulating the picture to end up with what I want is super satisfying. 🙂

Shout out to my buddy Marsha, for being a voice activated light stand! 😉 ↓ Gah! This chick has the bluest eyes ever! ↓ A before-and-after of a photo I had in my head. The tub was too small to get what I wanted, so it needed a little bit of editing. Love how it came out! 🙂