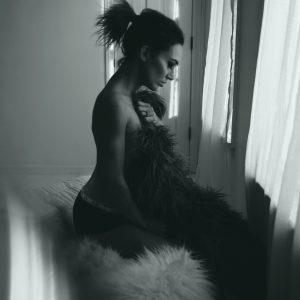 Hey folks! It’s been a quick minute since I last posted anything – I did some stuff which took up all my time and brain space, like buying and producing a photography retreat and deciding to stop shooting weddings as my main focus in my photography career.

2017 was a volatile year. Not personally as much (I traveled the world, photographed some dope weddings, met some great people) as on a social level. My eyes have never been more opened and my voice has never been louder than right now. It seems everything is finally coming to light and it was long overdue; the conversations have been deep and painful and educational.
About racism. About discrimination. About sexism.
Hate.
Fear.
Anger.
Misogyny.

There seems to be so much of all that floating around these days. And I know it has always been there, but our current political climate has given all of this a more visible platform and an amplified voice.
A voice that says it’s okay to hate and judge and monger fear.
My cozy little bubble is no more.
And that’s a good thing. 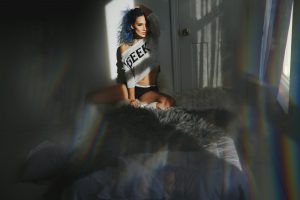 It made me want to do something with my career that felt…empowering.
I’ve loved photographing weddings for the past eight years. Especially since it was never something I thought I’d do, or fall in love with. I’ve met some really terrific people, both as clients and as colleagues, and I’ve danced so many hours at so many receptions, my blisters still have blisters. So, with the exception of second-shooting for some of my dear friends, and the occasional wedding for a friend of a friend (and all that jazz), halfway through 2017, I decided to just do a complete 180 (a 540, really) after Inspire and switch up things for myself.

I’ve decided to focus on making women feel beautiful.
To strip away the notion that a woman who shows her curves, her skin, her body, is a slut. Or easy, or cheap, or a whore.
I want to do away with the assumption that because you are proud of your body, you are then also vain, or full of yourself.
To stop this nonsense of associating boudoir portraits with sex. Of associating it with ‘things women just shouldn’t do’.
I want women to stop being afraid that loving their bodies means they are doing something wrong.
To change the narrative that in order to look beautiful, you need to fit a certain mold. A certain size, a certain color, a certain age.
To give women the opportunity to see themselves as I do: MAGICAL AF. 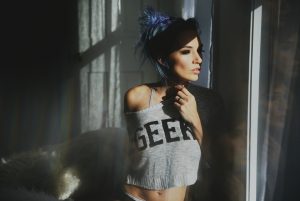 Seriously, though. A woman’s body is amazing. Don’t believe me?

• By nature, the female heart is programmed to beat two times faster.

• Women are more flexible (yeah, we are) because our muscles and tendons contain more elastin.

• We have a larger corpus callosum, the part of our brains which allows women to multitask more effectively than men.

• Female skin has double the sensitivity of than that of men.

• Because of estrogen, which blocks inflammatory processes, women tend to have a higher pain threshold, even though we have twice the amount of pain receptors.

• A woman’s neck is more flexible. When a woman hears her name called, she turns her head. A man typically turns his entire body.

• Women form stronger attachments to other people because of higher oxytocin levels, as well as better developed brain areas responsible for the feeling of affection.

• We can distinguish more shades of color, higher frequencies of sound and more varying levels of sweetness than our male counterparts.

• Most of us can grow a complete human being in our bellies, carry all that around for nine months, and then bring it out into the world either via a crazy surgery where they cut open our bellies and scoop out our insides, or by pushing a bowling ball through a keyhole.

• We also use double the amount of sounds and non-verbal signals. Just more evidence of women being the most fantastical communicators. 🙂

• And, according to this study, only 4% of women consider themselves beautiful.
Which is a terrible statistic, ladies. 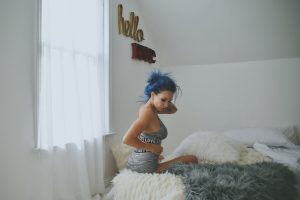 I want to have as many of you see just how fierce and fabulous you are, and that you are enough. That being happy is sexier than anything. That a real smile exudes confidence and sensuality, and power and just all-around kickassery.
And that you can be a stone-cold stunner at any age, any size, any shape, any color, any creed, any damn way you please.
Boudoir doesn’t mean birthday suits and boobs out, and it doesn’t NOT mean that, either. The portraits I take are to make you see yourself as the perfect creature the universe created you to be. And that can be in a lace corset, in an over-sized cable-knit sweater, in a silky gown, in your own skin. Whatever makes you feel sexy!

So, here I am. completely changing my own narrative, hopefully changing some of yours in the process. And it can be hard! And scary! I took my own portraits, and dude…it got awkward AF a few times…but that’s okay! Being awkward doesn’t mean you can’t also be fierce. And feel good, and look like a whole damn meal, plus a snack at the end. (that’s me trying to use current jargon, y’all)
My favorite moments are when I squeal in utter delight when I take a dope photo of you, and you follow that up with a genuine laugh, because it feels so good to know you are killin’ it. That’s two photos in a row I’m gonna be stoked to show you.

I have a delightfully rad studio space in North Haven, a closet full of shiny, sparkly goodies and a passion in my whole body to create some serious magic.
Hopefully, you’ll come on this journey with me and end up loving yourself even more! 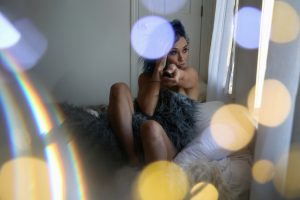 Here’s an (unedited!) photo I took of myself right after I roll backwards off my air mattress like a fool.

3 thoughts on “A new leaf – My journey into empowering women!”