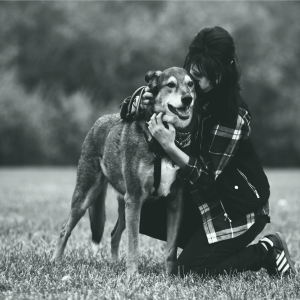 I photographed this particular session a little while ago. And while I am normally pretty on top of editing and delivering galleries, throwing up sneak peeks on Facebook and making sure my clients get to enjoy their photos as soon as possible, I just couldn’t bring myself to open this particular one up, to work on it.
You see, Beth and Bob brought in their adorable, lovable, furry, hairy, slobbery ball of licks and tail wags, Nelson, for a very special portrait session. Nelson was diagnosed with cancer a little while back and had surgery to remove the tumor. But that damn thing grew back within weeks faster than before, and with a vengeance. I know it’s been said many times, but it always bears repeating: Fuck cancer, dude.

So, Nelson only has a little while left to live, and Beth and Bob are making every day count. He gets the best food, so he can be nice and fat and chubby and so, so happy. He goes on long walks, gets tons of scratches behind the ear, and all of the snuggles.

Before the kids, my hubby and I went to a shelter around the holidays one year, to take some of the dogs out for a walk, and we ended up walking out with a huge, big, brown, scary-looking pit-mix, we named Kosmo. And Kosmo was our baby…until we actually had babies. Then he kept tumbling down that family totem pole, still always remaining content with whatever affection came his way. When Rylan would steal his food from out of his mouth, he didn’t mind. When Max would climb all over him and tug on his ears, he just laid there, looking super disinterested.
Kosmo was SUCH a good dog. So incredibly wonderful and kind. Why anyone ever gave him up…it remains a mystery.

Our first ‘baby’ passed away from cancer, and I am crying as I write this, because it freaking sucked. He went from weighing 97 pounds to a mere 59 in a matter of weeks. He became incontinent, and before we knew he was sick, I used to get so mad at him, thinking he was giving me attitude, defying me by peeing all over the place. It still eats me up that I ever yelled at him over that.
Once Kosmo was diagnosed, we had maybe a week, maybe a little bit more, before we brought him in to be put to sleep. Because he was in pain, and he was withering away. The doctor said surgery wouldn’t help, and that it was time to let him go.
We bawled  so hard, lying on the floor, our baby in our lap. When he took his last breath, I swore I’d never get another dog again, because who would ever want to go through this on purpose?

Well, that lasted a few years. We now have Maggie, who is fierce and loyal and a little bit crazy. She isn’t Kosmo, but she is amazing in her own way. And we love her as much as we did him. Once you have experienced the unconditional, unwavering love only  a dog can give you, it is hard to go without.

So, taking photos of Nelson, it was hard for me. I loved every second of it, and would do it again in a heartbeat, but I knew I’d be sobbing while editing them.
And I am a snotty, red-eyed mess right now, for real.

Nelson, I hope you are living out your final days in pure, meatball-filled, cat-chasing, ear-scratching bliss. And Beth and Bob, my heart hurts so much for you; dogs should outlive us, they are much better at life than we will ever be. I am certain Kosmo and a big crew of other incredible dogs will be awaiting his arrival to run around and chase tails with. 🙂

“When the Man waked up he said, ‘What is Wild Dog doing here?’ And the Woman said, ‘His name is not Wild Dog any more, but the First Friend, because he will be our friend for always and always and always.’” – Rudyard Kipling [The Jungle Book]