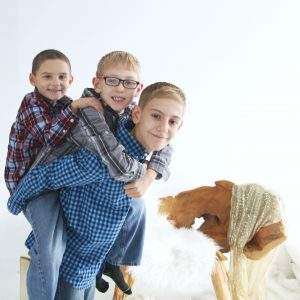 I’ve known Todd and Jenn for a little over a decade.
They are quintessentially ‘those people’.
You know the ones I’m talking about.
The ones you call when you buy a 15 foot above ground pool on a whim (what a dumb idea) and have no idea how to assemble it.
The ones who read your Facebook status about being out of wine (the horror!), and drop off a bottle at your door five minutes later.
The ones who go through every little thing they own, and put together boxes and boxes and boxes of stuff for a single mother in need.
The ones who would give you the shirt of their backs, if you asked them to.
They are THOSE people.

And they are also the ones who, without hesitation, without a single shred of doubt, took in a lost little boy when he had nowhere to go. When what this little boy needed more than anything in the world, was stability and love. When a scared, confused and broken two-year-old needed a family more than anything in the world, they didn’t hesitate. They didn’t waver.
They just looked at each other, and smiled and nodded.
And they went from being a family of four, to being a family of five.
And they took that little boy, and loved him, sheltered him, flooded him with care and compassion, and so much patience. Patience as he adjusted, to a new life, to a life where he was cherished and appreciated. Where he was allowed, encouraged, and emboldened to be the very best version of himself he could be.
He was welcomed, open arms, into a family of hugs, kisses, and snuggles.
He now had advocates for his well-being, at home, in school, the world at large. People who would go to the ends of the earth for him, who would die a thousand times over to spare him a single second of pain.
He went to having two wonderful, kind, gentle and tolerant older brothers to look up to, who reassured him with their protection, that fierce loyalty that only exists between siblings, now and until they are old and frail.

And this little boy blossomed.
And is still blossoming.
Every day a little bit more.
Because he is loved.
And he knows it. Sees it. Feels it.

All three of them. 🙂

12/12 EDIT: I realized last night why I am so impressed and inspired by Jenn and Todd.
We’d all like to think we would do the same exact thing they did, the right thing, but the very the hard thing.
But many of us wouldn’t, or don’t.
I grew up needing support, in some way or the other. We were really poor, and struggled a lot. And my saving grace were my friends who pretended not to see just how crappy things got at home for me, and instead, just kept inviting me over on the weekends for sleepovers (and a good meal). I’ll be forever grateful to those friends and their parents who allowed me to create a happy bubble around myself to protect me from things I didn’t want to go through.
I was never scooped up and out of harm’s way by any family. Neither was my little brother. Perhaps because they didn’t know just how bad things got. I’m not sure.
And we are both fine today. Better than fine; we took all that happened and rose above, stronger for having gone through what we went through.
Still, the adult Me really wishes the child Me had had someone like Jenn and Todd in my corner growing up.

All kids want, is for someone to love them, and shelter them, take care of them. And every kid should have that.
So, that is why these two people hold a special place in my heart. 🙂 2 thoughts on “Those People”