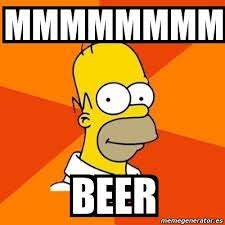 And not in that hipster-i only drink craft beer-fedora wearin-‘brooklyn is so rad’-and i liked everything before it was cool kinda way. A nice tall glass of that delicious malty goodness accompanied by a delicious plate full o’pizza and I’m one happy girl. I swear I’m healthy but in the words of Selena Gomez “the heart wants what it wa-a-a-a-a-a-a-a-ants.”

Beer gets a bad rep: from the freshman 15, to the beer goggles, to the beer belly people get when the beer-to-exercise ratio is a little skewed.

But thanks to my intense research, aka my google search bar, beer enthusiasts can rejoice! Proof that beer is awesome!

1. Anti-Cancer Properties: Just like beer’s sophisticated cousin, il vino rosso, beer has been proven effective in fighting cancer. There is a flavonoid compound called Xanthohumol (don’t worry I can’t pronounce it either) that’s found in the hops commonly used in brewing beer. According to Bio-medicine, it is also a good source of polyphenols, due to the grains used for fermentation. Those also aid in the prevention of cancer and cardiovascular diseases emerging.

2. Reduced Risk of Cardiovascular Diseases: Beer contains vitamin B6 (as well as B1, B2, and B12), which prevents the build-up of homocysteine, fighting the development of heart disease. It has a thinning effect on the blood and prevents the formation of clots, which cause blocks in the coronary arteries.

3. Later Dandruff: It’s also one of the best natural ways to fight dandruff! Thanks to it’s high levels of yeast and vitamin B. Pour a little in your hair a couple times a week for some soft and shiny hair and if you have dandruff kiss it goodbye. Shower beers just got way better.

4. Reduces the risk of inflammation: Hops contain these badass chemicals called bitter acids and according to a 2009 laboratory study published in Molecular Nutrition and Food Research, they’re super duper powerful at fighting inflammation. 5. Increased Bone Density: Silicon, not silicone, is uber important in building and maintaining healthy bones thereby preventing the risk of fractures and osteoporosis. Got Beer?

**If you’re a fan of IPA’s or malted barley deliciousness they’re chock full of silicon. Wheat based not so much.

6. Prevention of Anemia: Beer enhances the body’s absorption of iron and is a good source of vitamin B12 and folic acid, a deficiency of which may lead to anemia.

7. Anti-Aging: Beer increases the impact of vitamin E, which is a major antioxidant in the body. It is a vital part of the maintenance of healthy skin, while also fighting the aging process.

8. Prevents Kidney stones: Beer has a high water content which helps flush toxins from the body and keeps the kidneys working properly. A study done in Finland established that daily consumption of beer can reduce the risk of developing kidney stones by 40%.

All of these fabulous facts are based on moderate consumption of beer, 1-2 bottles a day. Pretty sure that chugging 8 beers a day will produce slightly different results 😉